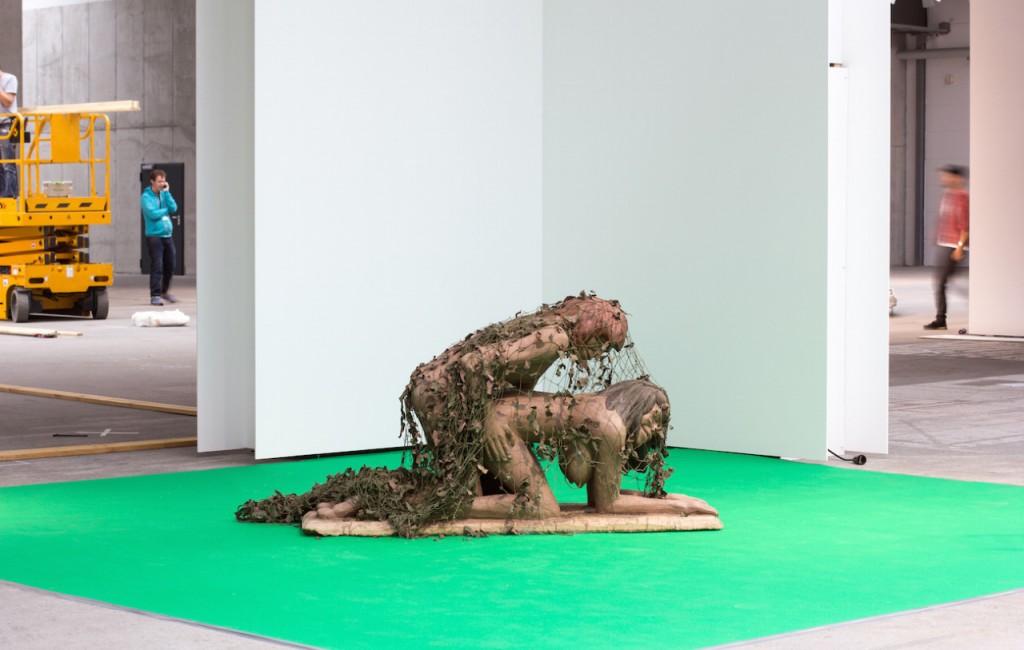 “Some artifacts are inhabitants of the hyperreal. Transferring them to the realreal reveals their hyper abstracted nature in bold letters.”

A hand-painted life-size concrete sculpture shows two pre-humans (biologically more correct: Homo Neanderthalensis, Homo Heidelbergensis, or rather a fictitious mix) caught in Coitus more ferarum—in bold terms: sexual intercourse doggy style. The fragile episode is obscured by a cheap camouflage net that shows just enough of the silhouette in order for us to easily decipher the situation. This roughly sculptured copulation scene, with all its details, defects, spalling and flaws of representation was found exactly as-is in a quasi-natural habitat: the junkyard of its creator—the East German Sculptor and Dinosaur enthusiast Franz Gruß (1931–2006)—two hours South of Berlin.

Transferred to a green screen setup, the two mating stone-agers (with unspecified origin and gender) find themselves put in-scene under the close observation of two glass laptops on nerdy laptop stands. This scene becomes the center of a situation that stage-like takes up the simplified aesthetic of a TV-studio or talk show. Two laptops—stemming from an older body of work (GlassBook – Content is King!, 2013)—are watching back. And what they see or what we see through them could either be a history-themed future fake-porn reality show or a cheaply crafted natural history diorama of the future us. The stone-agers on display are of an asexual rubberlike androgyny; they are neither hot nor luscious, neither sexy nor attractive. They aver super-neutrality in these terms and copulate in wild romantic slack tenderness inevitably declining our understanding of sensual aesthetics by their clumsiness. They are the materialized script of a story that makes us feel better with our present lives.

The green screen becomes an indexical force and refers for one: to the abstraction of the original (super) natural and wild surroundings of the figure, and for two: on the prototypical background of a fairytale aware film making and post-production that considers illusion-making its craft. It hints at universal reductionism and by this specific background, the sculpture glides into an abstracted space and loses its one-to-one correspondence in real life. It is the realization of a depiction—and illustration of a set of scientific findings and ideas – put back to a 3-D-reality. These two pre-humans are the knot of a full circle that looks unreal, because it imitates a reality that wasn’t real anyways. Despite its appearance it prefers to claim its neutrality as a random object illustrating a scene. What is real however, is the three-minute-attention-span we are all inclined to. Unwillingly, we react to what is strongly symbolic and has a kind of ready-made-digestion quality. The sculpture openly addresses this phenomenon (however true) and pays tribute to a rather event-based approach to art that seems so ultra-contemporary. Event sculpture—one minute: symbol—one minute: material—one minute: shape or action—Done.

The hyper abstracted figure—almost blow-up plastic toy like—is a lesson in human history filed under the slogan “Before we were humans we were beast like creatures with peculiar habits”. This epic scene of our past is realized in the universal material of human driven innovation: concrete, the angel dust of our globalized urban contemporaneity.

However, the naïve and explicit scene, a bit too obvious in the center, is not to be mistaken for the real focal point of this installation. The laptops, and therefore our brains, are the true actors. On view: a show set in complete fiction—like playing with rubber dinosaur figures and cows at the same time in a simple timelessness. It directs our attention to a situation where the object’s specific quality is almost nullified by its context. The bodies furthermore overuse gender markers heavily and hence leave room for heated speculations. The green screen carpet—once again—pays tribute to Hollywood’s omnipotence spoken out like: “I can make you anything anywhere”. Fiction is the only place for reality.

Admitted, it is an extraordinarily strangely looking sculpture in a bold set-up. So be it, Look close.

„Rough Thoughts on Referential Tenderness and the Hyper-real“ is an internal monolog and transcript of thinking aloud about the function of contemporary art on the occasion of a debate between the artist Tilman Hornig and abc-artfair on whether or not this piece of work should be permitted to be shown at the abc 2015. Tilman Hornig was selected by Galerie Lehmanns to show this installation in Berlin 2015. [Konstanze Schuetze]

„Rough Thoughts on Referential Tenderness and the Hyper-Real“ [Eng]